Lyon’s traditional cuisine is renowned worldwide, but despite its fame, some of the most authentic dishes in the Lyon canon can be a bit tough to swallow for even the most adventurous foodie. But fear not! Our survival guide will help you navigate the pages of any Bouchon menu with confidence and we’ve broken it down into three levels, depending on how outgoing you’re feeling.


“Le Caviar de la Croix Rousse”
In the 19th century, les canuts, Lyon’s silk weavers, couldn’t afford expensive ingredients but they still wanted to show the middle merchant classes that they too had refined tastes. To do so, they gave their dishes names that gave the impression of luxury and richness. A simple lentil salad seasoned with cream and cervelas (dried sausage) or smoky lardons (bacon cubes) is a classic first course in the repertoire of Lyon’s populist cuisine and thus this dish became known as “Le Caviar de la Croix Rousse.”

"La Cervelle de Canuts"
“La cervelle” (literally, brains) was a luxurious delicacy in the 19th century, out of reach for the working-class canuts. As such, they gave this name to a dish that they could afford: a mix of faisselle (a fresh, creamy cheese similar to thick yogurt) seasoned with shallots, parsley, chives, and olive oil or walnut oil. This dish is now known as La Cervelle de Canuts and typically served at the end of the meal at Bouchons in Lyon, as a savory option for dessert or with steamed potatoes.

If you’ve cleared the bar with La Cervelle de Canuts, prepare yourself for the next level ! We’ll begin this level with some pork products and then even more pork ! As you start to dig deeper in the traditional Bouchon dishes, you’ll soon understand that Lyonnaise cuisine uses everything in pork !

Les Grattons
Let’s begin with les grattons, the ubiquitous Bouchon nibbles. Grattons are small bits of pork fatback deep-fried in oil, crispy bits of fatty goodness that you will likely find served as an appetizer with a glass of wine or on top of a green salad in your first course. 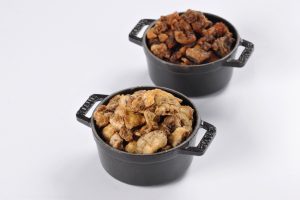 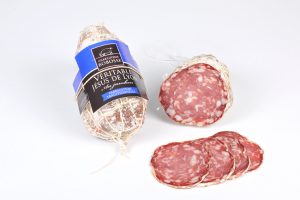 Rosette, Jésus, and more (sausage, sausage and more sausage !)
It’s important to know that Lyon’s charcuterie tradition is not limited to sliced, cured hams or dried sausages. Here in Lyon, you’ll discover a wide range of dried, cured meats with curious names such as “Rosette” (literally, little rose) or even “Jésus” both are similar to Italian salami and are composed of a mix of pork meat and fat. Lyon’s renowned Jesus sausage is particular for its size and shape: 10 centimeters in diameter and 400g in weight.

Unlike other parts of France, in Lyon, certain charcuterie preparations are meant to be eaten warmed through and even cooked. Bejeweled with pistachios and sometimes black truffles, saucisson chaud, can be served as a first or main course accompanied with a warm lentils or potatoes, or it can be nestled into a loaf of rich and buttery brioche which is warmed through and served in slices to start a meal.

The Sabodet is perhaps the most unique sausage in this category though, composed of ground pork head (yes, the entire head – ears, snout, skin, etc…!) and seasoned with red wine, garlic, and nutmeg.

Gâteau de Foie de Volaille
Lastly, if you tend to eschew pork on menus, you must try a gâteau de foie de volaille (chicken liver cake). Made with fresh chicken livers from the neighboring region La Bresse (famous for its succulent poultry), eggs, brioche and shallots, this traditional dish is a sort of liver soufflé served with a tomato sauce and olives as a first course. Definitely reminds our grandmothers !

Are you ready to take your Lyonnaise gastronomic experience to the next level? If so, you must face two well-loved classics in the offal category, neither of which is for the faint of heart ! Bouchon menus in Lyon are rife with organ meats and Lyonnaise cuisine has always been rooted in a nose to tail eating philosophy. Let’s get to know two of the best known dishes you’ll likely encounter… 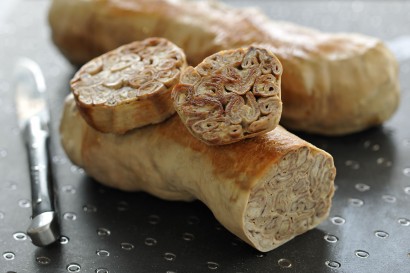 Not to be confused with andouille sausage well known in New Orleans’ world-famous cuisine!
L’Andouillette lyonnaise is a whole other animal ! Andouillette is a pungently flavored, pork tripe sausage, traditionally prepared with a casing made from veal intestine, and often coated in breadcrumbs before being pan-cooked and served with a creamy, mustard sauce. The traditional recipe calling for veal casing was banned in the late 1990s due to the Mad Cow disease controversy but as of August 24, 2015, the ban has been lifted, allowing chefs to return to the authentic recipe. Bobosse is the reference !

Edouard Herriot, Lyon’s mayor from 1905-1957, famously compared l’andouillette to politics saying: “Politics is like an andouillette sausage, it should smell like sh*t, but not too much.”


Le Tablier de Sapeur
Our last essential dish in the canon of authentic Lyonnaise cuisine is reserved for the most adventurous eaters. Le tablier de sapeur (soldier’s apron) is a dish prepared from a specific part of the cow’s stomach known as the paunch or the rumen. This triangular cut of tripe is first parboiled, then marinated in white wine and finally breaded and pan-fried. It is traditionally served with a sauce gribiche which is similar to a mayonnaise with fresh herbs, cornichons, and worcestershire sauce.

This traditional Lyonnais dish was given its name by Boniface de Castellane, a French military officer in the 19th century and a tripe-loving Lyonnais. Historians say that he gave the dish this name because the triangular form specific to the cut of meat reminded him of the leather aprons soldiers once wore to protect their uniforms. 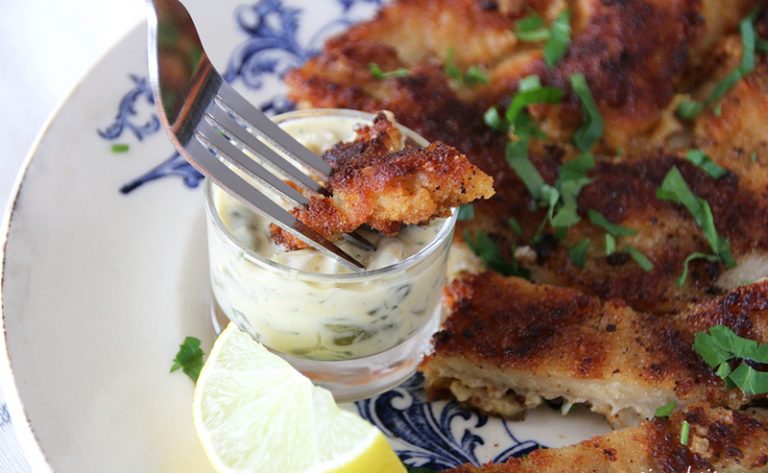 Once you’ve eaten a Tablier de Sapeur, you can officially call yourself a true Lyonnais!
We hope that this guide helps you to better understand the ingredients and the history of a few of the classic dishes you’ll see on many Bouchon menus.